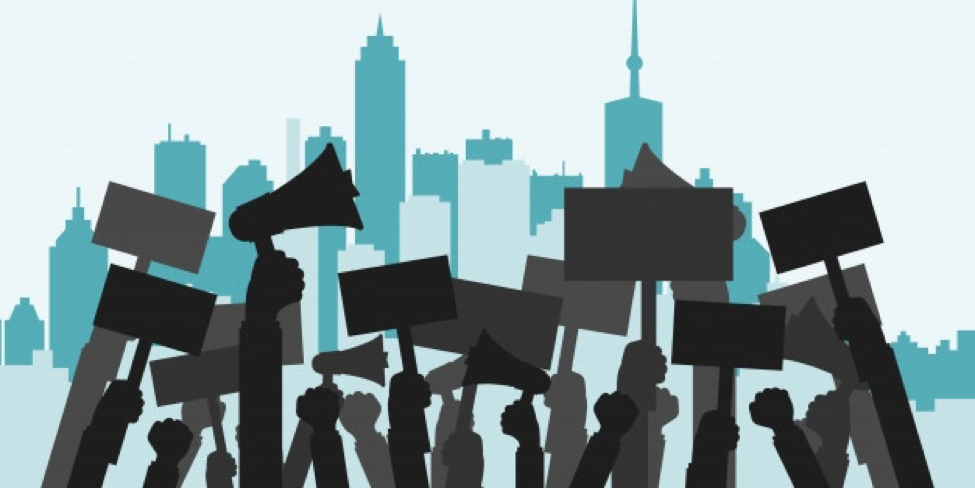 Human Rights Network Uganda & 6 Others vs Attorney General Constitutional Petition No. 56 of 2013

In Constitution Petition No. 9 of 2005 Muwanga Kivimbi v Attorney General the Constitutional court declared and nullified Section 32(2) of the Police Act as unconstitutional. In 2013 the Parliament of Uganda passed the Public Order Management Act 2013 (POMA) and it was duly assented to. However in December 2013, a Constitution Petition No. 56 of 2013 was filed in public interest before court challenging the constitutionality of various core provisions of POMA. The Petition was later amended to only seek declaration nullity on Section 8.

Following the unanimous decision of Court in Muwanga Kivumbi vs Attorney General (supra) and the subsequent enactment of the Public Order Management Act, 2013, Human Right Network Uganda and six (6) others filed a Constitutional Petition averring gross restrictions on an individual’s ability to exercise rights to hold public meetings, assemblies and processions by the POMA and the absolute broad authority, discretion and power it grants to the Inspector of Police to stop, control and disperse public meetings. The petitioners therefore challenge the constitutionality these provision and among others on the backdrop of Article 92 of the 1995 Constitution.

Whether the enactment and assent of section 8 of the Public Order Management Act was inconsistent with and in contravention with the Article 92 of the 1995 Constitution?

By majority decision of 4:1 the Lordships declared and ordered that section 8 of the Public Order Management Act was unconstitutional and therefore null and void.

His Lordship Hon. Justice Cheborion Barishaki JA/JCC relied on the principles that guide court in Constitutional Interpretation as stated in Male Mabirizi & Others vs Attorney General. Among them and most relevant in the circumstance were; – the purpose and effect of the legislation, the history of the county and the legislation history of the Constitution. The learned Judged asserted that the petition raised fundamental issues touching the constitutionally guaranteed right to demonstrate peacefully and unarmed, and the extent to which the right can be limited or subjected to regulations by law enforcement agencies such as the Uganda Police Force. He further asserted that the petition also raised an issue that concerned the extent to which the Parliament and the Executive can pass legislation in response to the decision of Court. This latter issue was equally fundament as it partly touched on the doctrine of separation of powers.

For purposed of placing the petition in proper context, the learned Judge reviewed the decision of Court in Muwanga Kivumbi vs Attorney General (supra) which nullified and struck down Section 32(2) of the Police Act being a violates of Article 20(2) and 29(1) d of the 1995 Constitution. The petitioners contended that Section 8 of POMA was passed to overturn the import of the decision in Muwanga Kivumbi’s case and therefore the contents of the expunged section 32(2) of the Police Act was re-enacted in section 8 of POMA. The learned Judge stated that at a very broad level, it cannot be surely argued that POMA targeted the court decision in Muwanga Kivimbi’s case per se as it does not take away the personal advantage accruing to the said Honourable Muwanga Kivimbi, and the 4th Petitioner in his individual capacity. However, that would be to adopt a very narrow and legalistic reading of the import of Article 92 of the Constitution bearing in mind that the decision of the court alleged to have been targeted by Section 8 of POMA was a constitutional matter resolving limits of the application of police to control demonstration and peaceful protests.

The learned Judge stated that, Article 92 of the 1995 Constitution bars Parliament from passing any law to alter the decision or judgment of any Court as between the parties to the judgment. The words in this provision to wit, “parliament shall not”, connotes or show that the provision is couched in a mandatory manner. He therefore found the above word in the aforementioned article are plain and clear and thus accorded them the same plain ordinary or natural meaning. And on further cognizance of the history of Article 92 and strict reading of Section 8 of POMA, the learned Judge identified the following aspects; first and foremost, Subsection 1 granted discretionary powers to the Inspector General of Police (the IGP), who in turn can delegate or authorize any other officer to stop or prevent the holding of public meetings. Subsection 2 allowed an officer authorized by the IGP to issue orders dispersing a public meeting as he/she deemed reasonable in the circumstance whereas Subsection 3 provides that while doing so he/she shall have regard to the rights of those to whom the orders has been issued and other persons. Lastly under Subsection 4, failure to adhere to orders issued therein above is an offence punishable under section 117 of the Penal Code Act.

The learned Judge held that, there is no doubt that just like the nullified Section 32(2) of the Police Act, Section 8 of POMA is neither couched in a regulatory manner. The provision of Section 8, on the face of it, clearly shows that the section is prohibitory in nature. It was further held that, without any hesitation therefore, the provisions of Section 8 of the Public Order Management Act are in pari material with the nullified Section 32(2) of the Police Act. The learned Judge stated that, in his view, the supervision of the public order is a core duty of the police and it cannot be discharged by prohibiting sections of the public from exercising their constitutionally guaranteed right to demonstrate peacefully or hold public meeting of any nature. Consequently, the enactment of Section 8 of POMA was done in blatant disregard by Parliament of Article 92 of the Constitution. The impugned provision as calculated, rather unfortunately to water down the import of the Court’s decision in Muwanga Kivumbi vs Attorney General.

In rationale of this holding, the learned Judge stated that, in as much as the impugned Section 8 is not in similar words with the nullified Section 32(2) of the Police Act, the latter’s subject matter, purpose and effect were only modified and varied in some degree but its true identity was never lost or destroyed. Section8 of the Public order management Act 2013 is clearly a reincarnation of the nullified Section 32(2) of the Police Act for all intents and purposes. He further stated that subverting the import of a Court’s decision/judgment in this manner, interferes with the doctrine of separation of power contained in the Constitution. Passing legislation that alters or undermines a judicial decision has dire implication for the future application of the check and balances necessary for the functioning of a civilized democracy and prevention of peremptory behavior by the three pillars of government, namely, the Legislature, Executive and Judiciary.