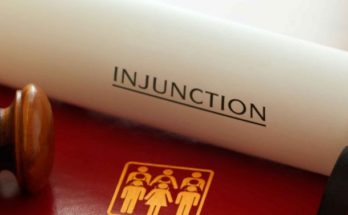 In the case of KAGUMAHO KAKUYO VERSUS SHILLA NINSIIMA MISCELLANEOUS APPLICATION NO. NO. 13 OF 2020.BEFORE HON. LADY JUSTICE ESTA NAMBAYO. Ruling delivered on 27/2/2020.

This was an application seeking the High Court to issue a temporary injunction. The orders were sought to restrain the Respondent and its agents from any attempts to recover a loan and its interest advanced by the Respondent to the Applicant in the sum of UGX 78,340,200/=. The orders sought also were with intent to prohibit commencement of any recovery process for the same until the final determination of civil 531 of 2019. The brief background of this case is that the Applicant obtained a loan facility from the Respondent sometime in 2016. He made some cash payments to the Respondent. Along the way, he defaulted on the payments and issued several postdated cheques in favor of the Respondent. The cheques dishonored, and the Respondent reported the matter to Jinja Rd Police Station. No sooner had the police started following up on the matter, the Applicant filed a case in this Court, and hence this application.
Section 38 (1) of the Judicature Act Cap 13 empowers High Court to grant an injunction to restrain any person from doing any act as may be specified by this Court.
The Judge went on to lay out conditions for granting the temporary injunction as;
 The Applicant must show a Prima facie case-with a probability of success. A Prima facie case is a case in which there is evidence that will suffice to support the allegations made in it and which will stand unless there is evidence to rebut the allegation. The Court must be satisfied that the dispute presented in the main or head suit is not a sham but a genuine dispute and that the Applicant has probabilities of succeeding in the main suit. In the instant case, it was found that there are triable issues as regards the terms of repayment of the loan.
 The Applicant has to prove that he will suffer an irreparable injury that would not adequately be compensated by an award of damages. The criminal charges brought against the Applicant at Jinja Road Police Station are in relation to false cheques issued by him. Court pointed out that since there is a suit pending before this Court regarding the matter arising out of the dishonored cheque, the Applicant might suffer irreparable injury should this Court find in his favor at the end of the trial.
If the Court is in doubt concerning the above conditions, it will decide the application on the balance of convenience. The temporary injunction was granted since the conditions were fulfilled.