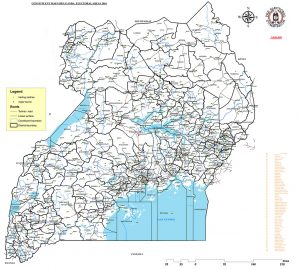 The Constitution of the Republic of Uganda imposes a duty on the state to divide Uganda into as many constituencies as possible for elections of members of Parliament as Parliament may prescribe and that one member of Parliament shall represent each constituency. When demarcating constituencies for elections, the Constitution places an obligation on the Electoral Commission to ensure that each county, as approved by Parliament, has at least one member of Parliament except that no constituency shall fall within more than one county. This means that each county falls under one constituency. Also, the Constitution provides that during boundary demarcation, the constituency shall have the number of inhabitants in it as nearly as possible equal to the population quota. This is in order to make management and administration easy and effective. However, there are instances where the inhabitants of a constituency may be higher or less than the population quota in order to take account of means of communication, geographical features, the density of population, area, and boundaries of districts.
In order to uphold the right to vote, the Electoral Commission has the mandate to review the division of Uganda into constituencies within twelve months after the publication of results of a census of the population of Uganda and may; as a result re-demarcate the constituencies. Uganda has since embraced the notion of decentralization. It has created local governments to help in administration, and a census under the law takes place in order to ascertain the number of citizens in Uganda today. The importance of this is that it helps with proper planning for elections and creating local governments for easy administration of the citizens.
A population quota means the number obtained by dividing the number of inhabitants of Uganda by the number of constituencies into which Uganda is to be divided under the law. Therefore, where the boundary of a constituency established under the law is altered as a result of a review, the alteration shall come into effect upon the next dissolution of Parliament that is after four years of that particular Parliament.