The Constitution of the Republic of Uganda under Article 104 provides for redress to an aggrieved candidate in a presidential election. Under this Article, an aggrieved candidate may Petition the Supreme Court for an order that a candidate declared by the Electoral Commission elected as president was not validly elected. A Petition lodged under this Article should be lodged in the Supreme Court registry within ten days after the declaration of the election results.

Following an inquiry by the Supreme Court as mentioned above, the Supreme Court may choose to either dismiss the Petition, declare which candidate was validly elected or annul the election.
In a scenario where an election is annulled, the Constitution provides that a fresh election shall be held within twenty days from the annulment date. However, if after a fresh election is held another petition succeeds, the presidential election shall be postponed and upon the expiry of the term of the incumbent president, the speaker shall perform the functions of the office of president until a new president is elected and assumes office.
In addition to the above, the Constitution only waives presidential immunity when a president-elect is sued in court to challenge his or her election as president.

It is important to note that the standard of proof in an election petition is a balance of probabilities and the burden of proof is on the Petitioner to prove their allegations. 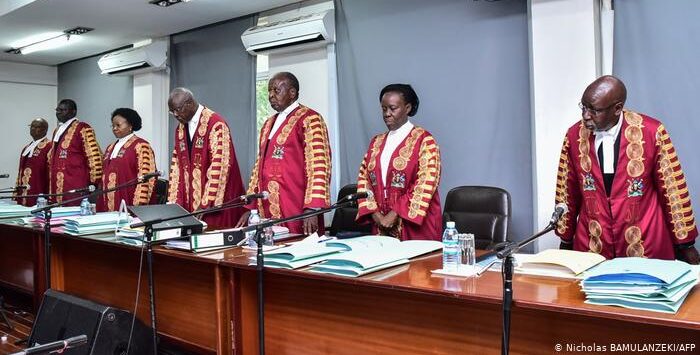 The Constitution of the Republic of Uganda under Article 104 provides for redress to an aggrieved candidate in a presidential election. Under this Article,
PrevPreviousArticle 97: Parliamentary Immunities and Privileges.
NextARTICLE 88-89 Order of Business in ParliamentNext